“There is a raccoon that looks stuck on the gate… his head is stuck in a can… Any chance you know what to do in this situation? (pic attached).”

Talk about a weird email to receive first thing in the morning, coffee in hand, as I arrived at the UF Fort Lauderdale Research and Education Center, in Davie, FL. Curious, I opened the attachment to see what appears to be a young raccoon hanging on for dear life at the top of a chain-link fence with an aluminum soup can firmly stuck around its head like a Halloween costume gone wrong. 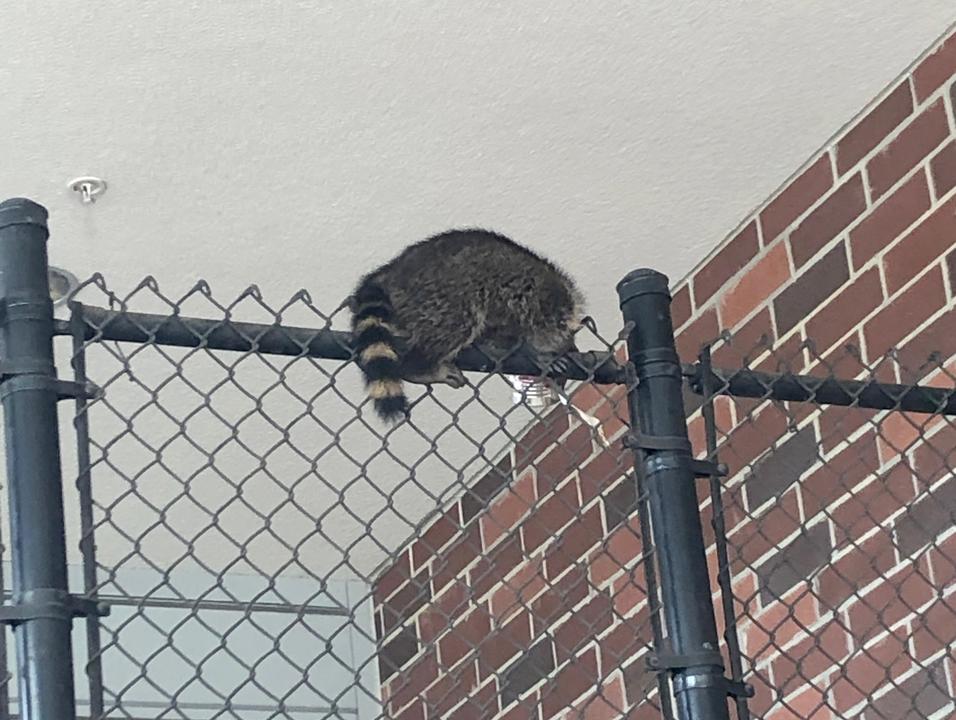 Not what I expected to see in my inbox this morning.

Bewildered, I marched out the door with Ph.D student Simona Picardi at my side. Along the way we met FWC Wildlife Biologist Ian Towne, who received the same strange email. When we arrived to the spot, we found a raccoon laying very still about 4 meters at the top of a very high fence with a Campbells soup can stuck over its head. Even as we approached it did not move, and I wondered if it had fallen asleep. A common tactic for raccoon is to rest in trees during the day to escape danger of predators. Nearby 20 meters away was a large dumpster with its lid open. The picture slowly came into focus:

Last night a young raccoon gorged himself on the delectable waste thrown out by the facilities inhabitants, as he had every day, when he found some delicious food precariously laying at the bottom of a soup can. Aided by some crafty raccoon tactics, it managed to shove its head all the way inside to lick the last bits at the bottom. As it finished, it realized the can was stuck on its head. Blind and scared, it worked its way out of the dumpster and attempted to find the nearest tree to hide in before sunrise; instead it found a chain link fence, and scurried up before the first humans could find it.

Ian leading the charge, roped the raccoon around the neck with our specially designed wildlife catch pole (a long aluminum pole with a thick loop of wire on the end to snag animals safely). I held the pole as Ian climbed the fence to pull off the can. Surprisingly the can took quite a bit of force to pull off. To the point, I severely doubt the raccoon could have it extricated itself. Finally free, the raccoon couldn’t help but stare off in the distance with a look of bewilderment, shock, and surprise at what it had just gone through.

Thankful for being out of that situation and hopefully a little smarter it later disappeared likely to its regular daily hiding spot. Check the whole scene in video:

We do not advocate attempts by lay persons to rescue raccoons, or any wildlife. The assistance that was provided to this raccoon was given by wildlife professionals with thousands of hours of experience, and up-to-date vaccines for most raccoon-borne pathogens (e.g. rabbies).

As these events are getting more common, we strongly recommend to call wildlife professionals or the police to the rescue before taking any action.

Certainly a weird situation to start any day, but not the strangest things Wildlife Biologists deal with. In fact, instances of wildlife animals involved in weird situations in the vast human-altered landscape are more common than people think. Be it bears that break into homes to steal food, alligators floating in a Florida man’s pool, to the even more harrowing tales of dolphins with fishing lines wrapped around them calling divers to the rescue. Even reports of raccoons with their head stuck in some container are becoming more and more common… These stories tell a similar tale of an increasingly difficult word for animals living in altered human landscapes. They also blur the conception that there exists a strict line between the human and natural world. With over 7 billion humans and the fingerprint of humanity ubiquitous across the globe, animals are forced to deal with these new realities in whatever ways they can. And with climate change rapidly accelerating the pace of change, things can change for animals very quickly12.

Some animals are adept at adapting to these changes, like raccoons, pigeons, and squirrels. Raccoons fit themselves easily into the human dominated landscapes. Planted trees, light poles, and dwellings mimic the natural terrain for them, and dumpsters full of trash and uneaten food provide ample opportunities for these curious omnivores to survive. But few animals can easily adapt their lifestyle to fit in human landscapes. Think of this, name every bird you can think of living in a United States city. Maybe 20? How about mammals? Ten? Now realize there are over 650 birds3 and 450 mammals4 living in the United States, and most can not survive in urban areas no matter how much they adapt. This makes human encroachment and the inevitable habitat loss one of the most difficult challenges for global wildlife populations.

But even for animals thriving in these spaces, there are unique challenges to overcome and important trade offs compared to wild populations. In particular, raccoons uniquely benefit from a wealth of resources we provide them (basically trash), and thrive at records densities in urban landscapes of south Florida (one of the densest raccoon populations ever reported was from Fort Lauderdale5). This usually translates into strong modifications of behavior. One of the most important is that territoriality is relaxed — raccoons are normally territorial with sometimes complex social systems. In urban landscapes, lack of territoriality leads to high promiscuity, which can in turn cause a number of diseases to become endemic. Raccoons carry many wildlife diseases. Some of which being lethal to them, and several are also a concern to humans and pets (rabies is the most concerning one, but also canine distemper, leptospirosis, baylisascariasis, and many others). Raccoons used to human proximity also increase conflicts with people (intrusion on private property causing damages, bites), and are more prone to roadkills (collisions with vehicles is the single most important cause of mortality). For all these reasons, we strongly recommend to not feed wildlife — besides, it is actually illegal in Florida — and keep trash out of reach of raccoons. 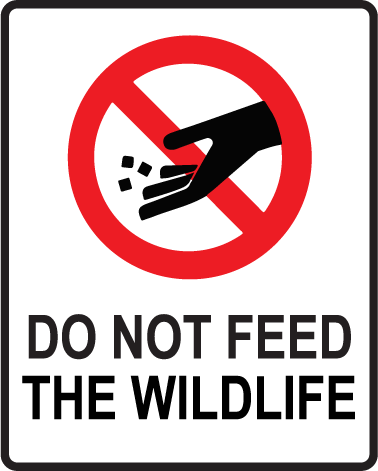