After cleaning the raccoon skeleton, several bones were missing and it was not possible for a skeleton to be reconstructed. Instead, the skull was reconstructed, and the spine and baculum were made into necklaces.

We were fortunate to recover most of the teeth from this raccoon. The upper right first premolar was missing when found. Two of the lower inscisors were lost during processing, one was lost before collection. The second lower left premolar was broken sometime during life, when viewed closely you can see the part of the tooth where the bone has healed over it. 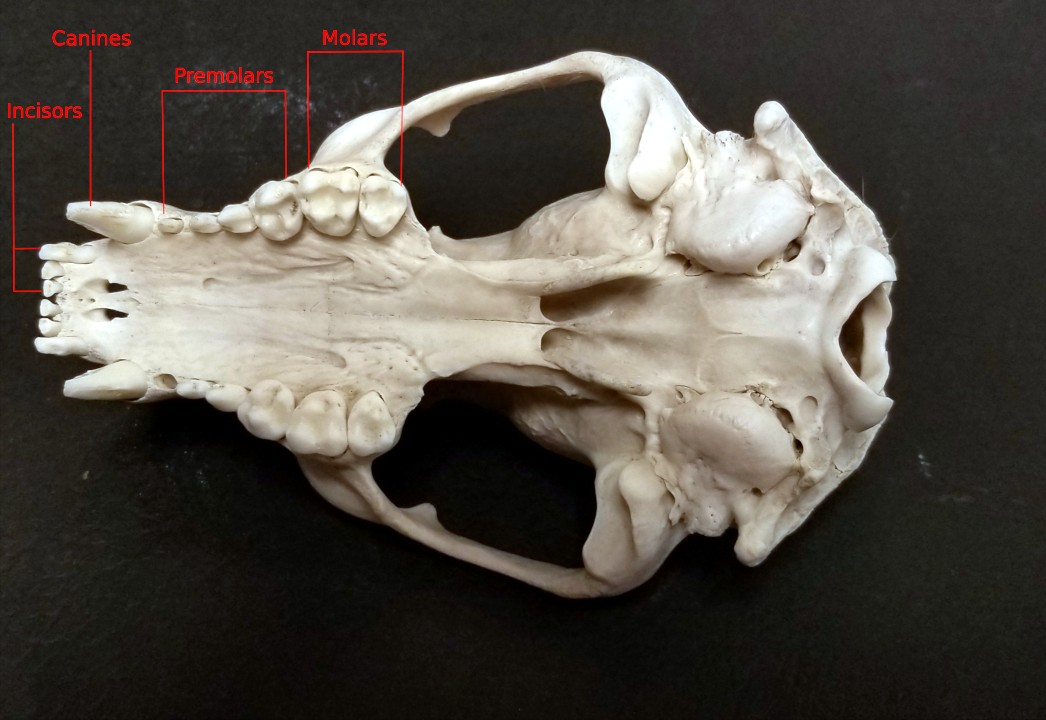 The dental formula for the upper jaw is 3 inscisors, 1 canine, 4 premolars, and 2 molars. 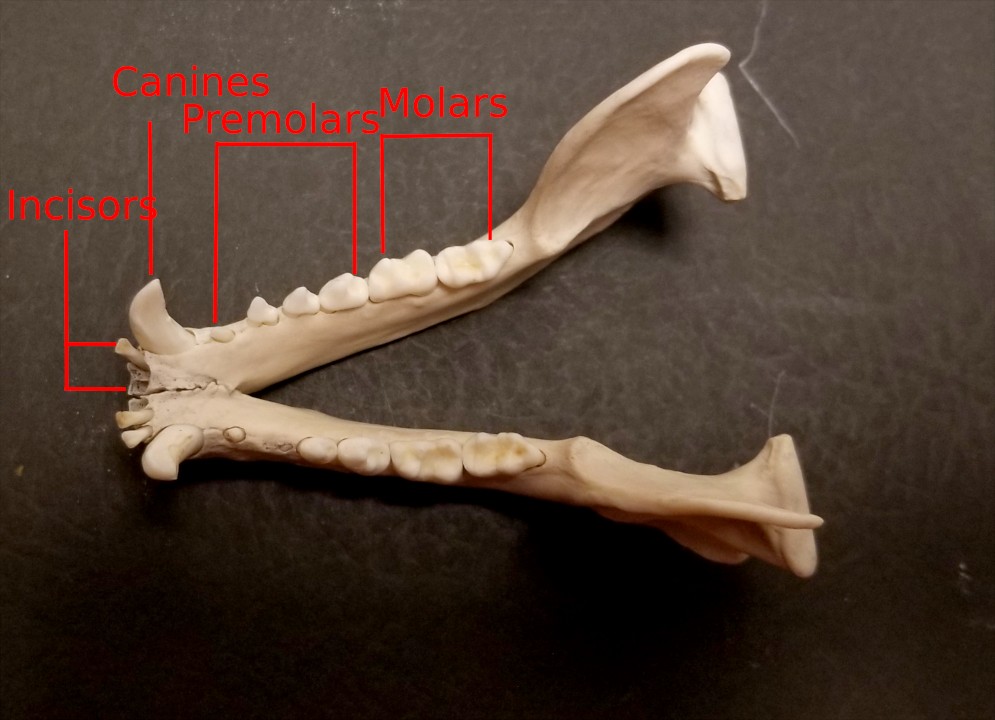 The dental formula for the lower jaw is 3 inscisors, 1 canine, 4 premolars, and 2 molars. 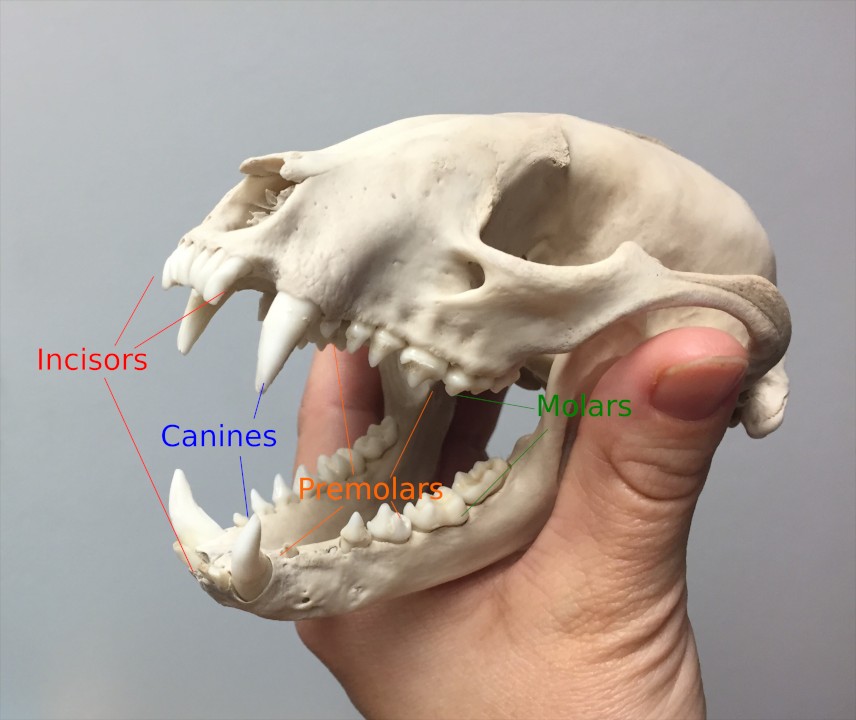 Most of the spine was recovered. The axis, C3, and one thoracic vertebrae are missing.

Almost all mammals have seven cervical, or neck, vertebrae. The first vertebrae that connects the skull to the spine is the atlas (C1), the second is the axis (C2). The remaining five cervical vertebrae have no specialized name. The ribs extend from the thoracic vertebrae, there are normally 12–15 of these in mammals, 13 in raccoons. Most thoracic vertebrae will have a tall, flat topped spine. Mammals normally have 6–7 lumbar vertebrae, most have bony projections from the sides. There should be 7 in raccoons. Saccral vertebrae support the pelvic girdle (hips), and number 3–5 often fused vertebrae. Last are caudal vertebrae, actually part of the tail and not the spine.

The baculum, also known as the penis bone, is present in most male mammals. Baculums are sometimes used as amulets for good luck or love. They can come in many different shapes and sizes, including forks and spines. In raccoons they are curved with a bifurcated lobe at the tip, and measure around 10 cm in adults. 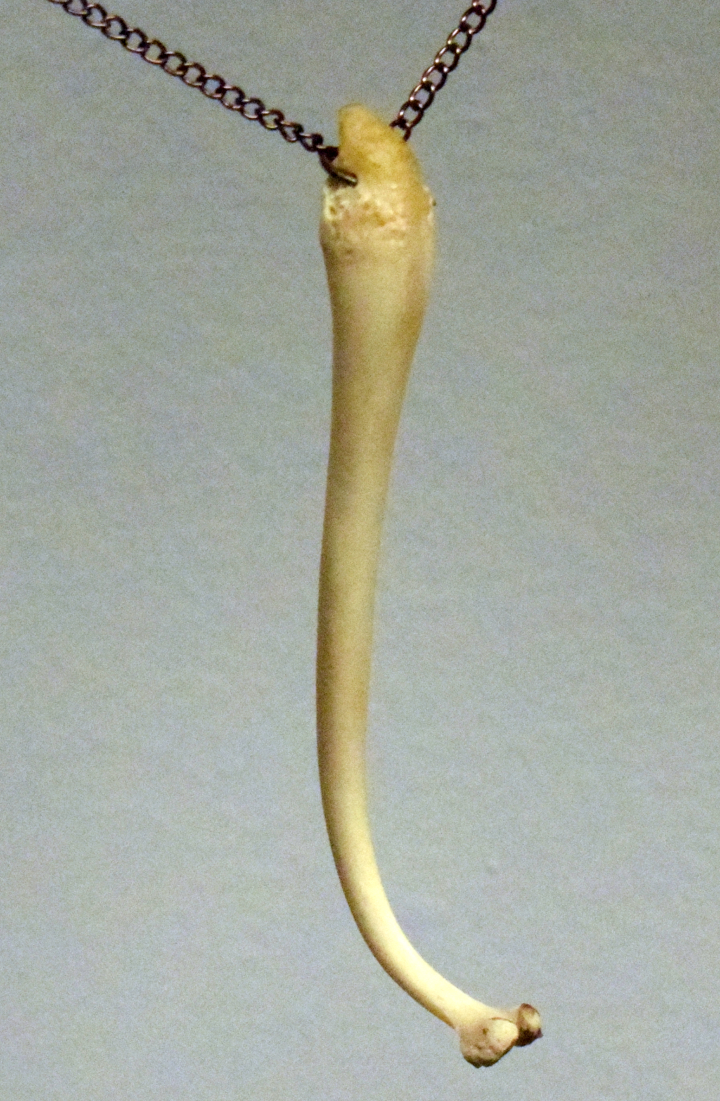