Survey on the R tracking packages: part I

In the previous post, we introduced the pre-print of our review of R packages for movement. R is one of the most used programming softwares to process, visualize and analyze data from tracking devices. The large amount of existing packages makes it difficult to keep track of the spectrum of choices. Our review aimed at an objective introduction to the packages organized by the type of processing or analyzing they focused on, and to provide feedback to developers from a user perspective. For the second objective, we elaborated a survey for package users regarding:

In the review we showed results regarding package documentation. In this post you’ll find the complete results of the survey.

Packages included in the survey

In theory, any package could be potentially useful for movement analysis; either a time series package, a spatial analysis one or even ggplot2 to make more beautiful graphics! For the review, we considered only what we referred to as tracking packages. Tracking packages were those created to either analyze tracking data (i.e. \((x,y,t)\)) or to transform data from tagging devices into proper tracking data. For instance, a package that would use accelerometer, gyroscope and magnetometer data to reconstruct an animal’s trajectory via path integration, thus transforming those data into an \((x,y,t)\) format, would fit into the definition. But a package analyzing accelerometry series to detect changes in behavior would not fit.

For this survey, we added packages that, though not analyzing tracking data, were created to process or analyze data extracted from tracking devices in other formats (e.g. accelerometry for accelerometry data, diveMove for time-depth recorders or pathtrackr for video tracking data). A couple of packages that, were finally discarded from the review because of either being in early stages of development (movement) or because of being archived in CRAN due to unfixed problems (sigloc), were included in the survey.

Packages from any public repository (e.g. CRAN, GitHub, R-forge) were included in the survey. Packages created for eye, computer-mouse or fishing vessel movement were not considered here (but you are welcome to make your own survey about them!).

Note: trajr was added to the survey in a late stage, but because of that, and the fact that it got only one response, we filtered it out of the analysis.

Participation in the survey

The survey was designed to be completely anonymous, meaning that we had no way to know who participated and not even the date of participation was saved. There was no previous selection of the participants and no probabilistic sampling was involved. The survey was advertised by Twitter, mailing lists (r-sig-geo and r-sig-ecology), individual emails to researchers and the mablab website.

A total of 446 people participated in the survey, and 233 answered all four questions. To answer all questions the participant had to have tried at least one of the packages. In the following sections, we analyze only completed surveys.

Let’s see first the level of use in R of the participants. The options were: 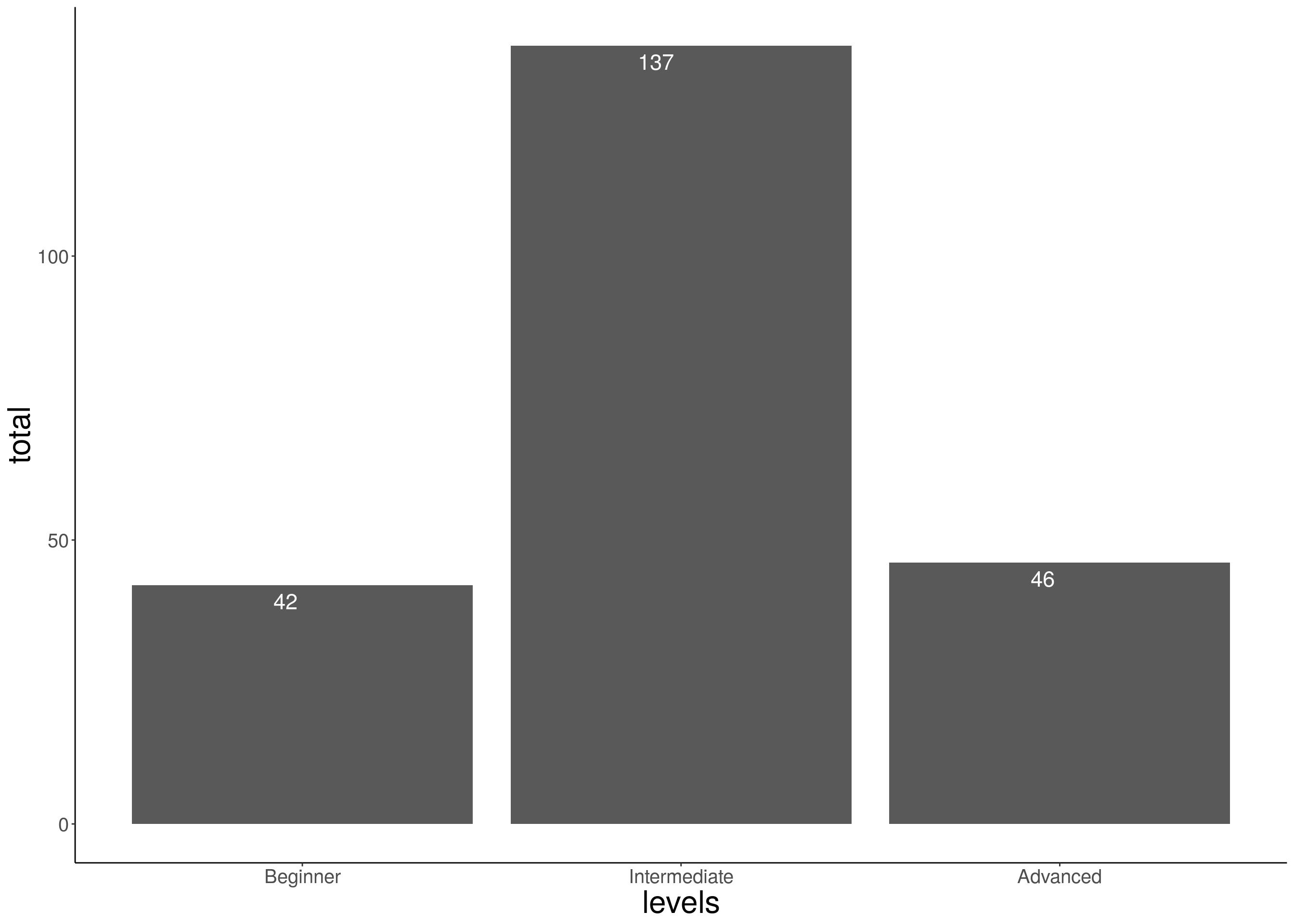 Figure 1: Level of R use

Most participants considered themselves in an intermediate level (60.9 %), meaning that they could write functions in R. Some others were beginners (18.7 %) and advanced (20.4 %) R users.

The first question about package use was: How often do you use each of these packages? (Never, Rarely, Sometimes, Often)

The bar graphics below show that most packages were unknown (or at least had never been used) by the survey participants. The adehabitat packages (HR, LT and HS) were the most used packages. These packages provide a collection of tools to estimate home range, perform simple trajectory analysis and analyze habitat selection, respectively. On the bottom of the graphic, smam (for animal movement models), PhysicalActivity, nparACT, GGIR (these three for accelerometry data on human patients) and feedr (to handle radio telemetry data) had no users among the participants. For that reason, those 5 packages will not appear in the analysis of the next questions. 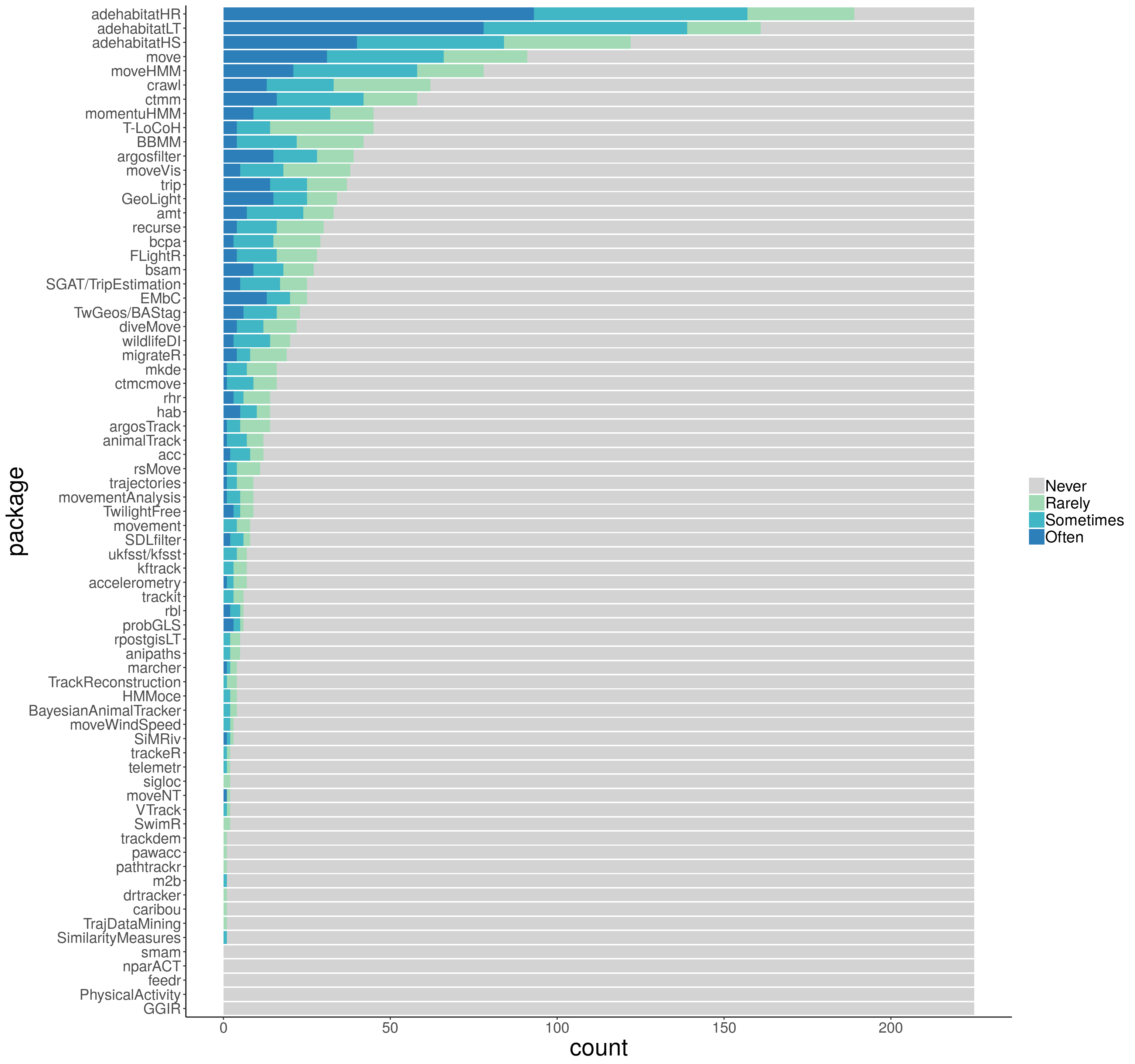 If you want to check the numbers for your favorite package, the complete table is here

There is actually not much difference in the number of packages used by the distinct levels of R users as you can see in the boxplots below: 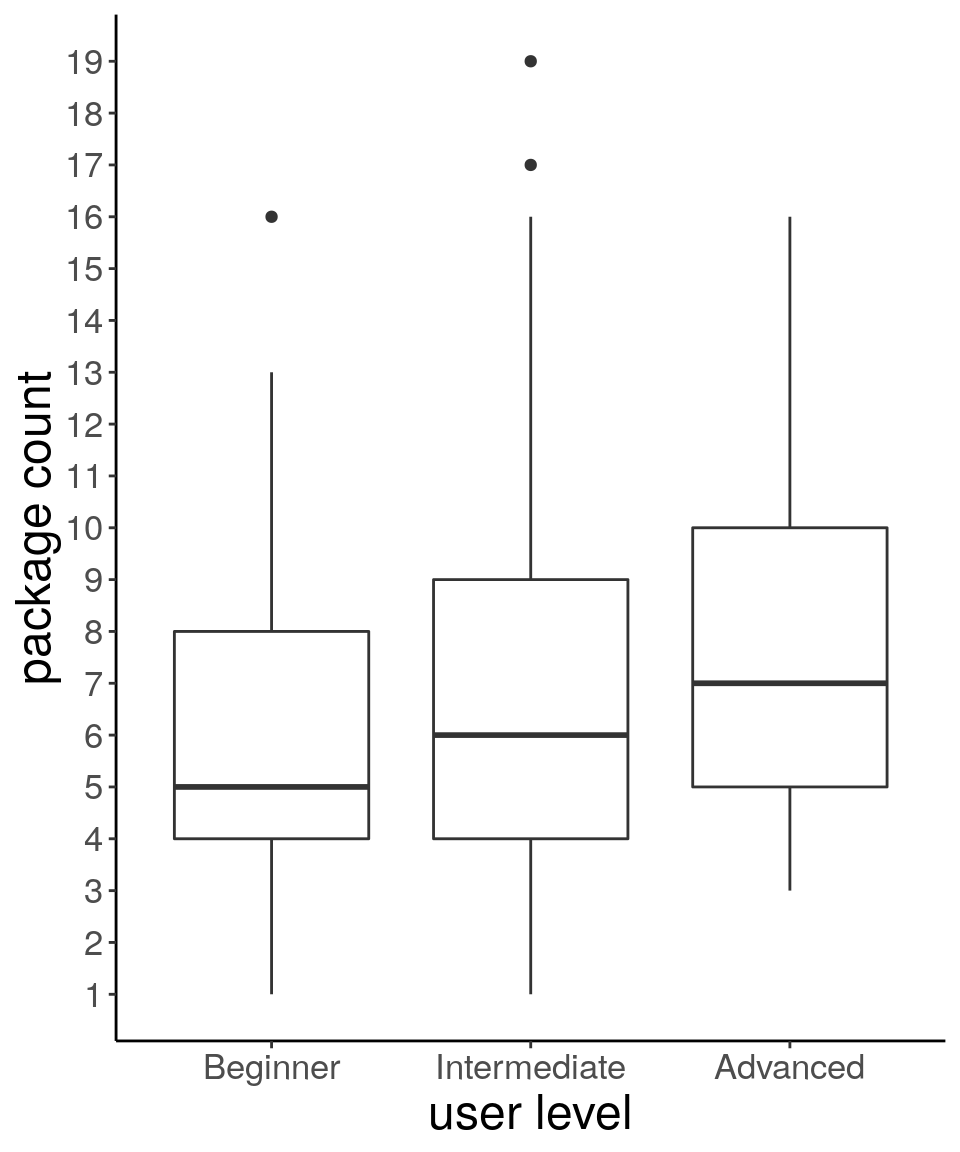 Without proper user testing and peer editing, package documentation can lead to large gaps of understanding and limited usefulness of the package. If functions and workflows are not expressly defined, a package’s capacity to help users is undermined.

In this survey we asked the participants how helpful was the documentation provided for each of the packages they stated to use. Documentation includes what is contained in the manual and help pages, vignettes, published manuscripts, and other material about the package provided by the authors. The participants had to answer using one of the following options: 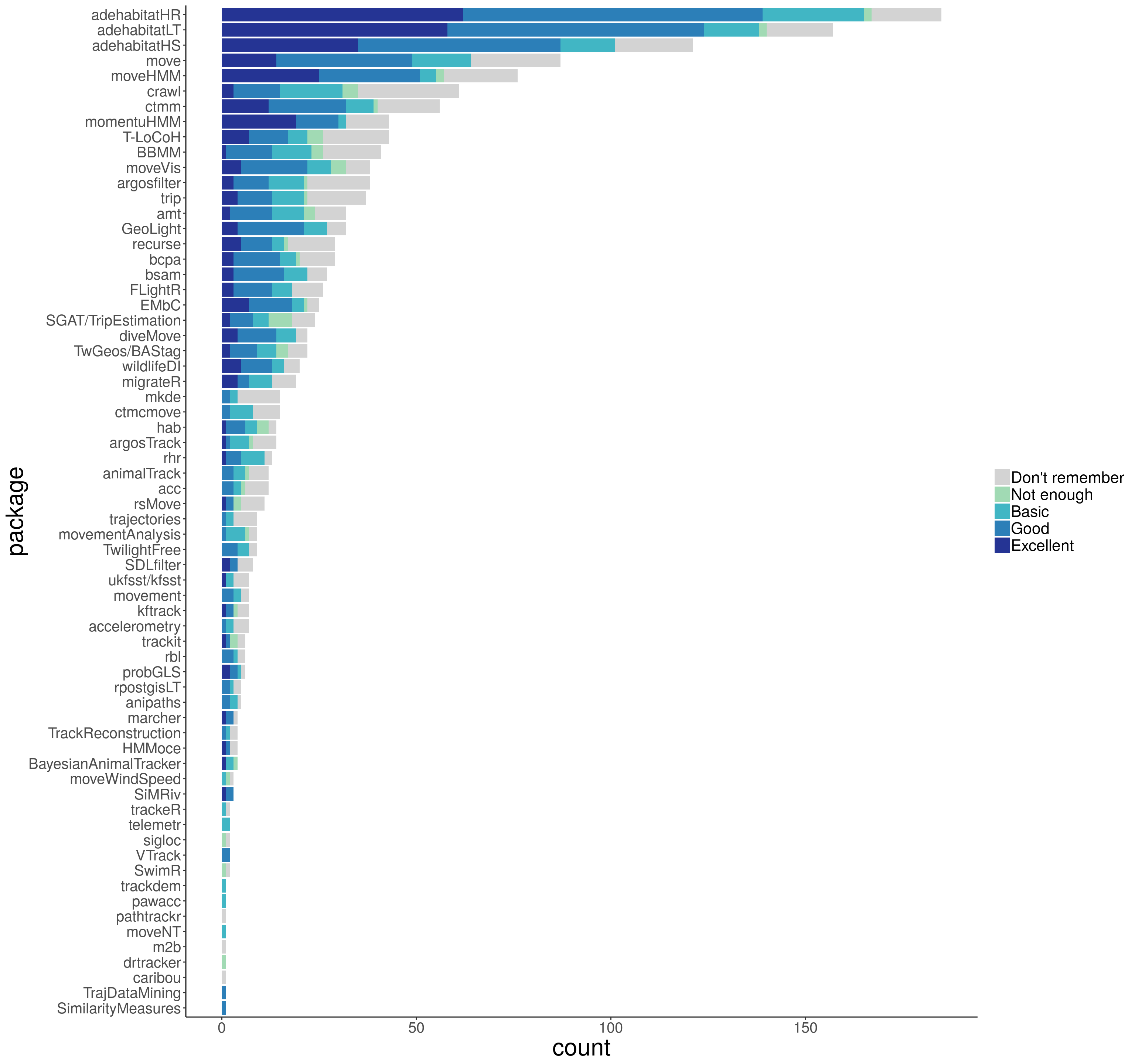 Figure 4: Bar plots of absolute frequency of each category of package documentation

Remember that participants could only give their opinion on documentation regarding the packages they had used. Hence, the packages with many users got many documentation answers (Fig. 1 and 4). Figure 5 allows for a closer look at the proportion of type of response for each package. 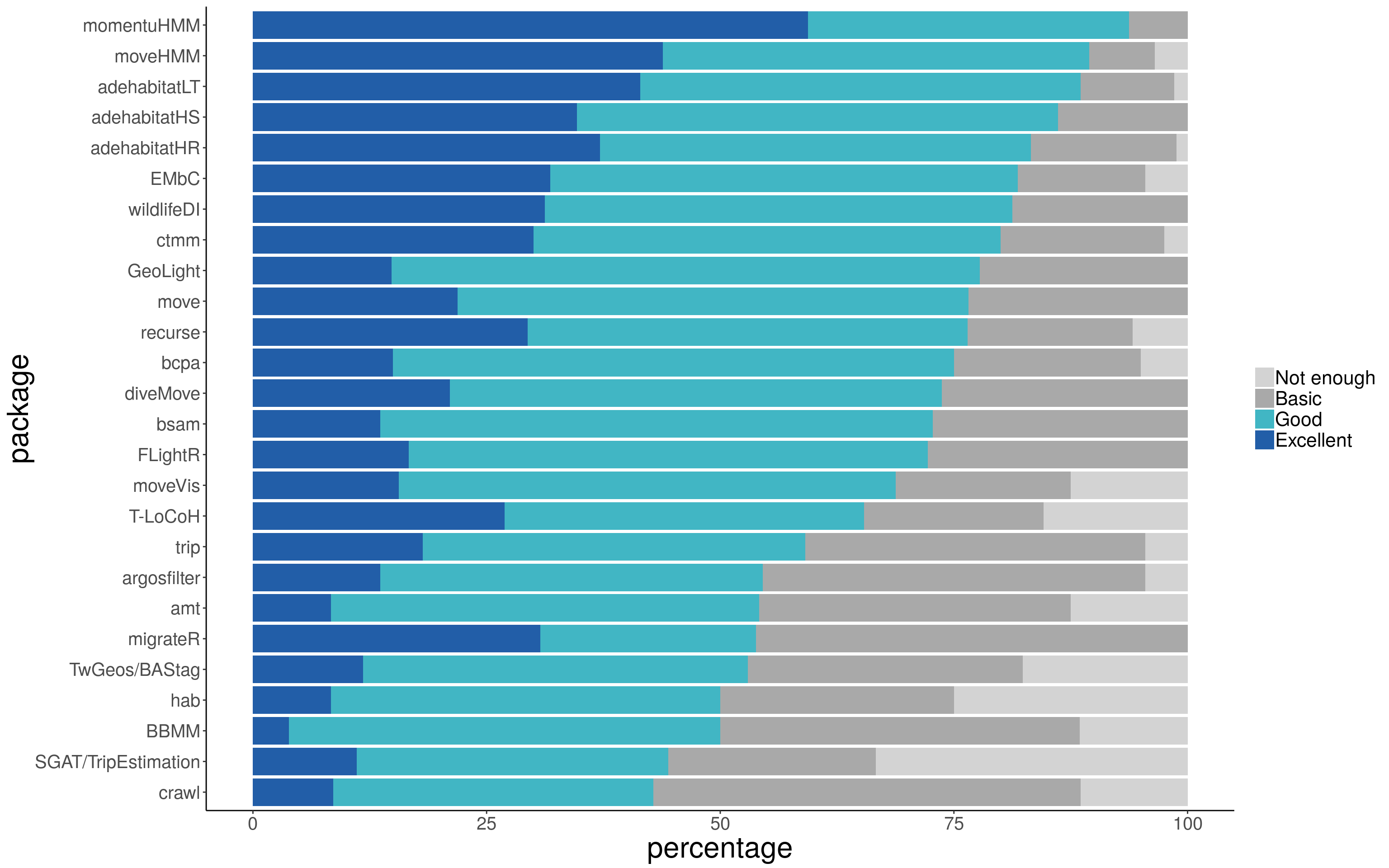 Figure 5: Bar plots of relative frequency of each category of package documentation (for packages with more than 5 users)

Participants were asked how relevant was each of the packages they use for their work. They had to answer using one of the following options: 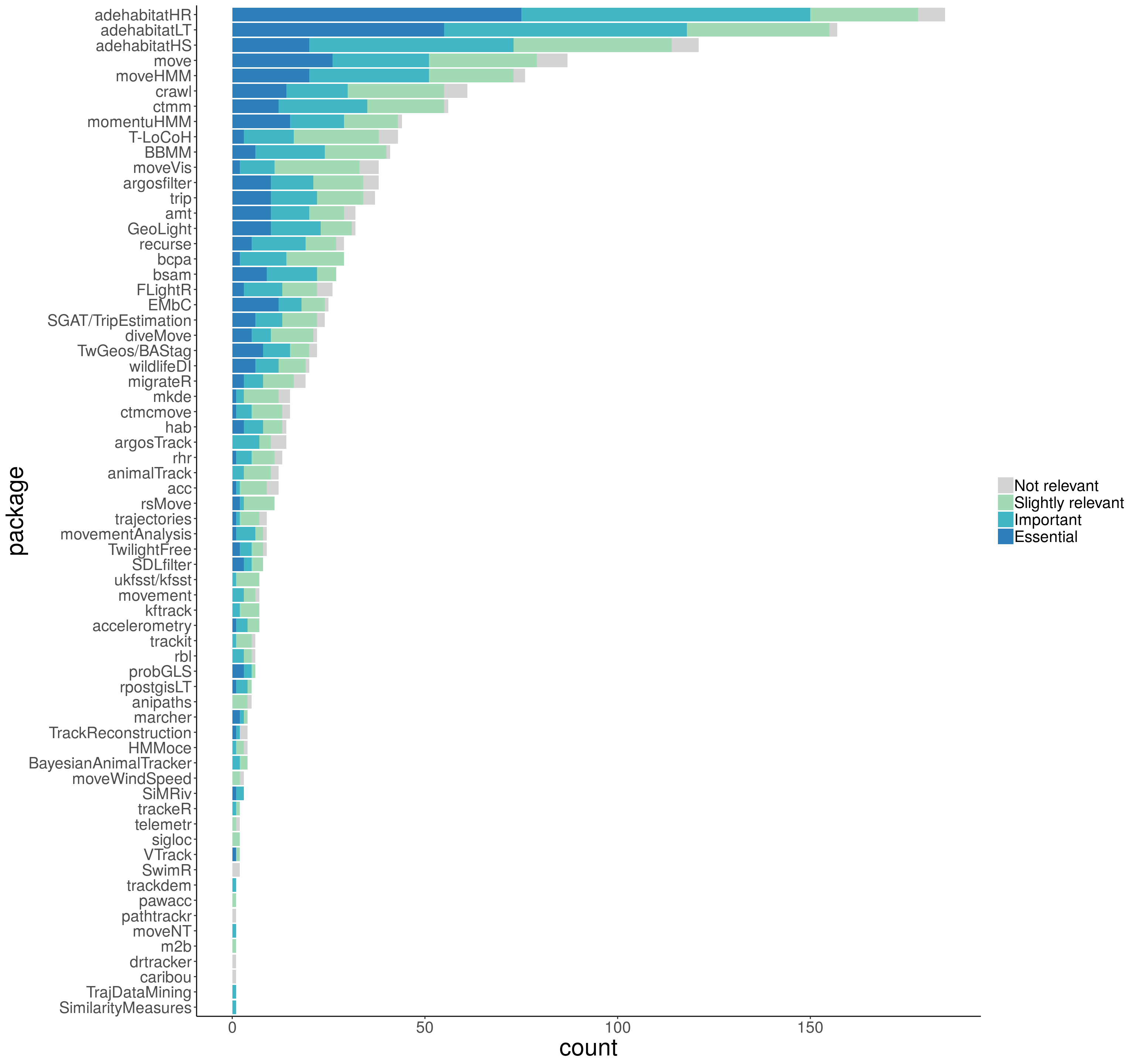 Figure 6: Bar plots of absolute frequency of each category of package relevance

The two barplots show the absolute and relative frequency of the answers for each package, respectively. We identified the packages that were highly relevant for their users, considering only those packages with at least 10 responses. Among these 33 packages, three were regarded as either “Important” or “Essential” for more than 75% of their users: bsam (81.48%; 22), adehabitatHR (81.08%; 150), and adehabitatLT (75.16%; 118). bsam allows fitting Bayesian state-space models to animal tracking data. 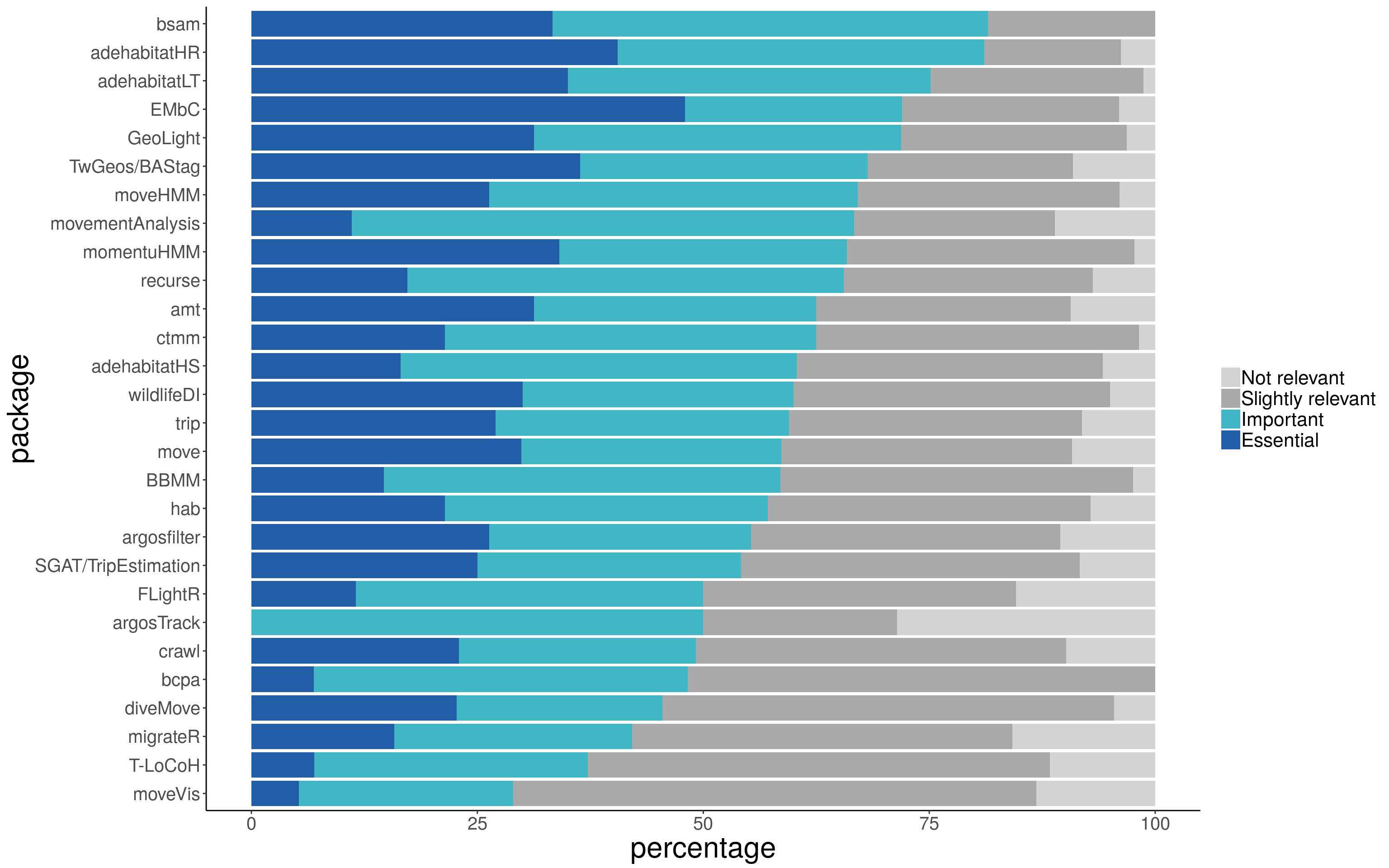 Figure 7: Bar plots of relative frequency of each category of package relevance (for packages with more than 5 users)

If you want to check the numbers for your favorite package, the complete table is here.

There is no perfect match between the number of users and the number of downloads per package, but a correlation 0.85 for the 49 packages on CRAN, provides evidence of an overall good representation of the users of tracking packages in the survey. Moreover, most of the packages with very few users in the survey regardless of their relatively high download statistics were accelerometry packages for human patients, which would be revealing that through Twitter and emails we did not reach that subpopulation of users.

A log-log plot for both metrics is shown in the figure below. 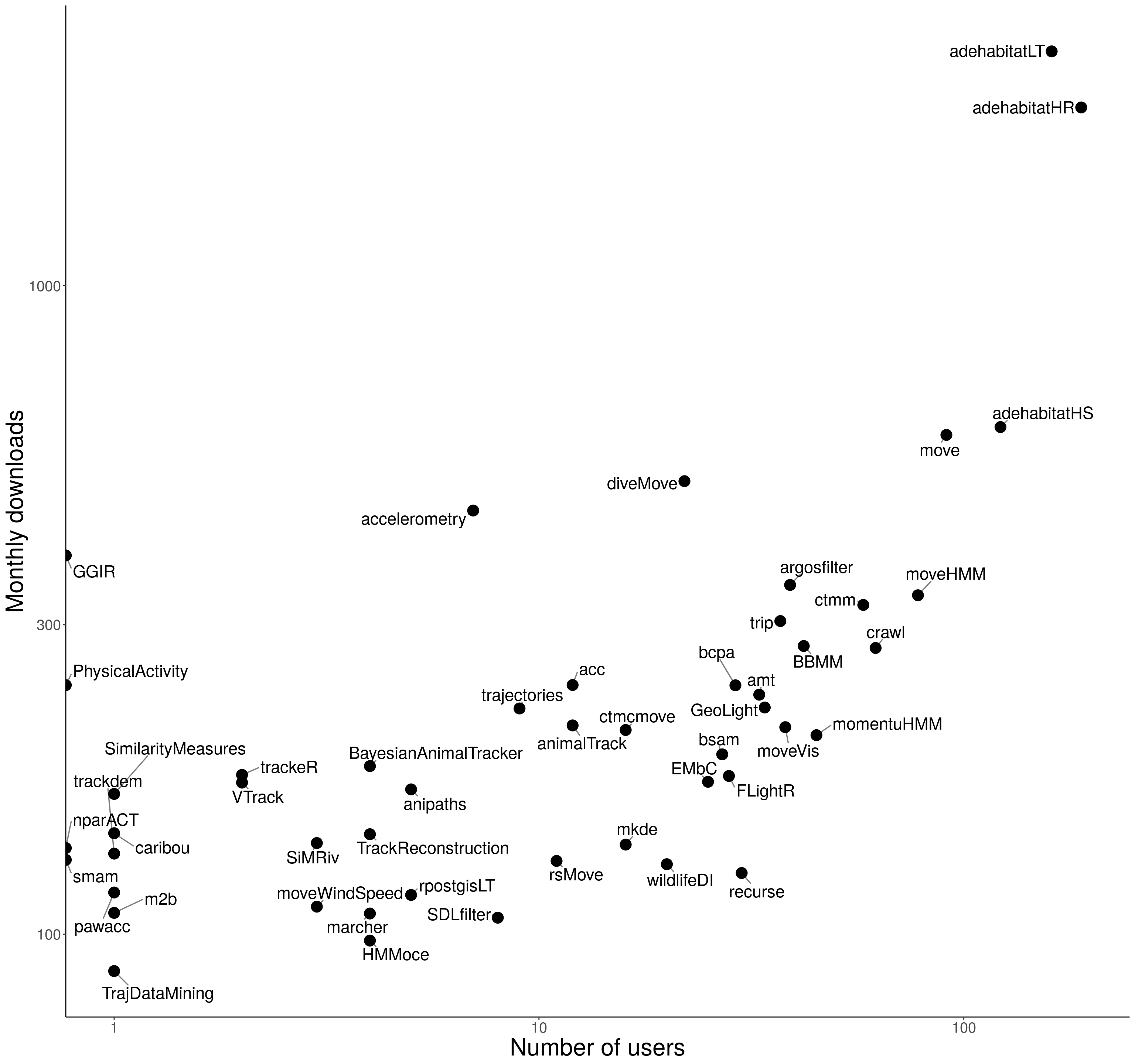