Background/Question/Methods
Migration is an adaptation to spatio-temporal heterogeneity of resources. In many species, migration allows to exploit suitable conditions for self-sustenance in one season and reproduction in the other. Partial migration, where a population includes both migrant and resident individuals, has recently been recognized as the most common yet understudied form of migration. Partial migration may represent an adaptation to extremely unpredictable environments. Wetlands are characterized by high year-to-year unpredictability of hydrological conditions, entailing challenges for survival and reproduction of wetland-dwelling species such as wading birds. Wading birds typically perform seasonal movements between large wetland complexes in response to regional discontinuities in hydrology. Wood Storks, particularly, exhibit partially migratory movements between wetlands in the southeastern US. Migration dynamics are an important component of how Wood Storks deal with environmental heterogeneity at the landscape scale. However, the mechanisms by which the coexistence of different migratory behaviors may benefit population performance are not known. Wood Storks are an excellent model to evaluate the adaptive value of partial migration in unpredictable environments. We used GPS telemetry to quantify migratory movements in a Wood Stork population tracked between 2004-2017.
Results/Conclusions
We analyzed movement trajectories for 66 adult Wood Storks, corresponding to 212 individual-years. We identified 121 round-trip migration events between a summer (non-breeding) and a winter (breeding) range. Regardless of whether they used a separate summer range, all storks exhibited a local shift within the winter range between a seasonal use area and the nesting site. We analyzed migratory choices across years for 46 individuals tracked for multiple years to assess lifetime migratory strategies. Among these 46 storks, 27 exhibited migrations every year, 13 remained in a single range year-round, and 6 showed variable migratory choices across years. The ranges of resident individuals, as well as the winter ranges of migrants, were all located in Florida. The summer ranges of migrants were spread out across the southeastern US. We suggest that the trade-off between migration and residency is between being able to exploit better environmental conditions in the non-breeding season versus being able to directly assess conditions in the breeding grounds and initiate nesting with appropriate timing. Our next objective is to evaluate reproductive success as a result of migratory choice to assess the relative fitness advantages of migration and residency in interaction with environmental conditions in each year. 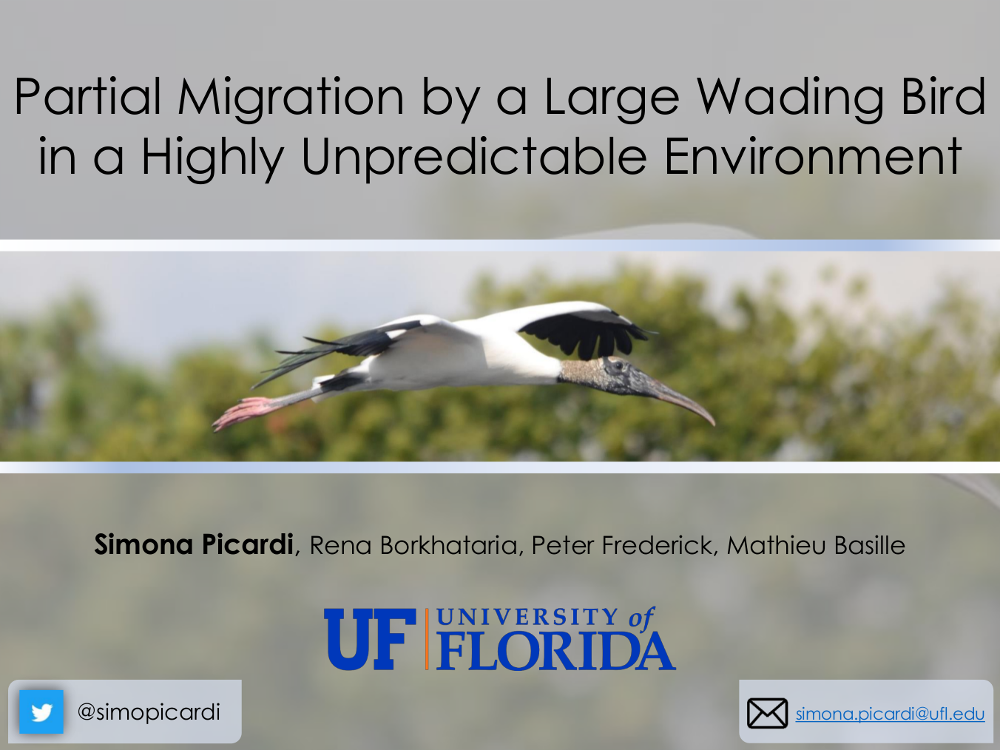 Video of my talk. Better viewed with the slides open side by side.