Background/Question/Methods
Raccoons are one of the most adaptable and ubiquitous species. Raccoons are distributed throughout North America and thrive in both natural and heavily modified or urbanized environments. Raccoons can arguably be considered a keystone species: they play a key role in ecosystem functions, with a major predation impact on small mammal and bird populations, among others. In this context, raccoons are an ideal model species to investigate the impact of humans on wildlife populations. We started monitoring raccoons in an urban park in the Greater Miami Area of South Florida. Captures of raccoons allowed us to collect morphometric measurements of raccoons for both sexes and all age classes, and to tag adults with GPS collars to understand their spatial behaviors. We then expanded the Raccoon Ecology Database (Rees et al. 2008), a comprehensive directory of raccoon studies covering a wide range of life-history traits, which we updated for the last ten years. This allowed to place our population in the context of the entire species range, and compare home range and morphology of South Florida raccoons to other populations in human-dominated landscapes.
Results/Conclusions
Forty-three raccoons have been captured in Tree Tops Park, Florida. Eight adults have been tagged with GPS collars, and monitored at fine temporal resolution (1 fix every hour). The update of the Raccoon Ecology Database included >700 studies for a new total of over 1,500 documents (mostly research papers). Raccoons captured in South Florida were in average smaller than generally in their range (mean±sd: 5.2±2.2 kg vs. 6.4±1.6 kg; t-test: t = -2.148, p = 0.040), highlighting a gradient that seems to contrast heavier raccoons in the northern end of their range compared to the South. Home ranges computed using 90% Kernel highlighted occasional excursions in neighborhoods outside the park, which sometimes required crossing primary roads for access. Raccoon home ranges in South Florida were actually much smaller than generally in their range (median: 13.5 ha vs. 129.4 ha; Wilcoxon rank sum test: W = 8, p = 0.006). A longitudinal gradient from East to West was apparent in home-range size (r² = 0.27), while home ranges were also bigger in areas with lower human impact (r² = 0.20). Our results indicate both behavioral and morphological adaptations of raccoons to urban areas, where resources are abundant (mostly due to human garbage), and territoriality is in turn reduced. 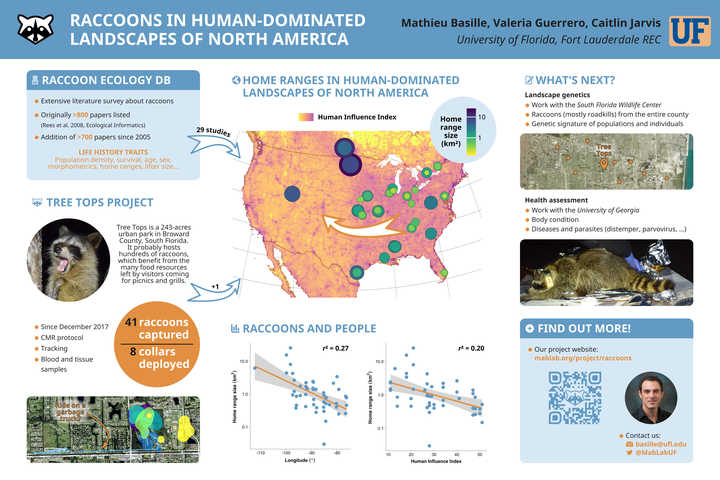