Raccoons (Procyon lotor) are one of the most adaptable and ubiquitous carnivore species, and thrive in both natural and heavily modified environments throughout their range. Their success in human-dominated landscapes makes them an ideal model species to investigate the impact of humans on wildlife populations. We monitored raccoons in an urban and recreational park in the Greater Miami Area of South Florida using both a capture-recapture procedure (71 individuals) and GPS tracking (15 collars) to understand their spatial behaviors in relation to human activities. Step lengths and turning angles between successive steps were analyzed in a Hidden Markov Model to infer internal states (resting and exploring). We highlighted the effect of urban infrastructures on raccoon behaviors with a Step Selection Function dependent on the internal state. Two thirds of the raccoons showed a preference to visit the local dumpsters, which collect all trash at the end of the day, and were associated to the smallest home ranges, 3–4 times smaller than for raccoons not visiting the dumpsters. Conversely, 71% of the raccoons avoided moving around human infrastructures, such as the roads in and around the park. We used the estimated parameters to simulate the movement of raccoons using a combination of a resource-independent movement kernel and a resource-selection function. The simulation allowed us to remove the attraction effect of the dumpsters in the movement model, which revealed both an increase in home range size and a displacement to other areas of the park for individuals heavily associated to the trash. Although food supplementation has a clear effect in this population, our study depicts a more complex situation, with part of the population ignoring anthropogenic food resources, and raccoons only rarely venturing outside of the park. The high density recorded in the park can also potentially lead to spread of infectious diseases, which could counteract the potential benefit of living in an urban area with supplemental food. This study highlights how forward modeling (i.e. simulations parameterized with statistical models on observed data) can be used in movement studies to uncover specific ecological processes.

Click on the thumbnail below for the slides. Slides optimized for 16⁄9 screens, use the PDF version otherwise. 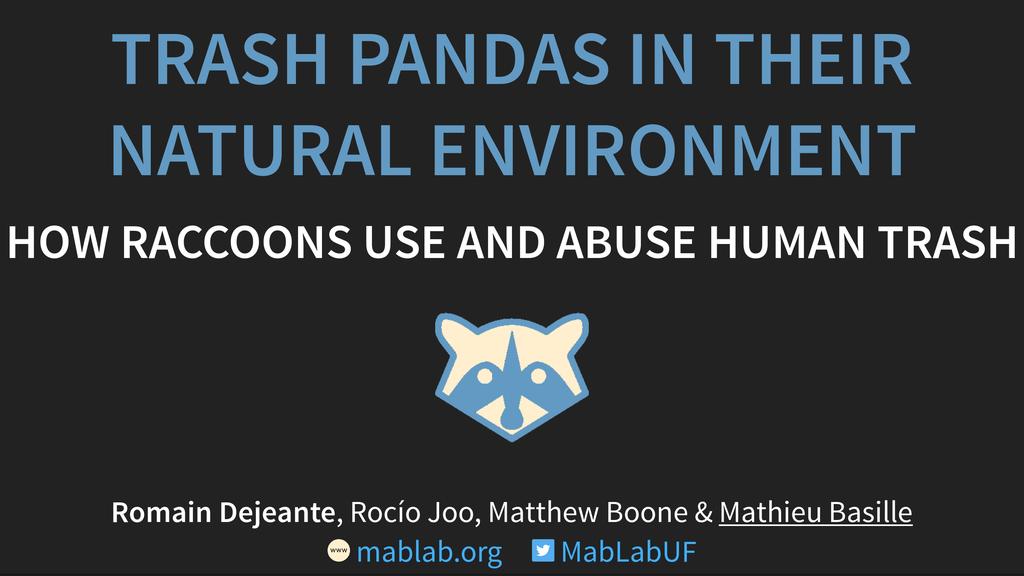